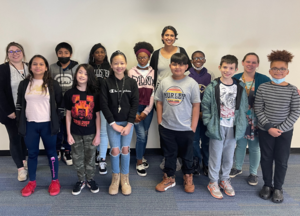 MSD Columbia campus's 5th grade students won the Inaugural Harriet Tubman 2022 Women's History Month Women of Courage Video Contest!
In celebration of the bicentennial birth date of Harriet Tubman, Governor Larry Hogan officially proclaimed 2022 as "The Year of Harriet Tubman" in Maryland. Sponsored by the Banneker-Douglass Museum and the Maryland Commission on African American History and Culture, children and adults living in Maryland inspired by Harriet Tubman's legacy were invited to submit a video on one or all of the three listed topics.
The fifth-grade students in Nidhi Joseph and Paloma Navarrete's class were already learning about Harriet Tubman, as part of their unit on Maryland in the 19th Century. They were very engaged and curious about her story. Upon learning about the contest, the students were inspired to honor the legacy of Maryland's native daughter and decided to write personal letters to Harriet Tubman. Their thoughts were then transformed into a video montage, which included their letters and drawings.
On Monday after school this week, Cheryl McLeod, the Harriet Tubman Bicentennial Committee chair and a member of the Maryland Commission on African American History and Culture, personally came to the MSD Columbia campus to share the news of the winnings with 5th grade teacher Paloma Navarrete.
The Maryland Commission on African American History and Culture will showcase the winning video during their virtual event, "Harriet Tubman Women of Courage and Maryland Day," next Saturday, March 26, from 2:00 p.m. to 4:00 p.m. This event will include an award ceremony and presentations about Harriet Tubman's life and legacy. You are welcome to attend and cheer on the fifth-graders all while learning more about Harriet Tubman. Register for the event at https://bdmuseum.maryland.gov.
Congratulations to the fifth-grade class!