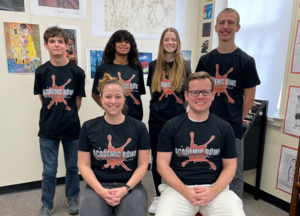 After a strong performance in the East Regional the last two weeks, MSD's Academic Bowl team qualified for the National Academic Bowl Competition!
The East Regional featured 20 teams, with the top five teams advancing to the national competition. The two-week virtual tournament started with pool play to determine seeding in the tournament bracket. MSD competed in Pool Z against Rhode Island School for the Deaf, American School for the Deaf, Louisiana School for the Deaf, and Mountain Lakes High School. The team did well, winning three of the four matches.
As the second seed in Pool Z in the tournament bracket, MSD won the Round of 16 match over the New York School for the Deaf and advanced to the quarterfinal round, where they lost to Model Secondary School for the Deaf by 10 points. The loss moved the team to the consolation bracket where MSD defeated Rockville High School and Rochester School for the Deaf to win the consolation bracket. MSD earned a fifth-place finish in the regional and a bid to the national tournament with the win.
Gallaudet University Youth Programs announced awards for the East Regional Academic Bowl competition and two MSD students were recognized. Congratulations to sophomore Noam Omstead who was named a Rising Star and to junior Keanu Herzig-Wilcox as an All-Star Player!
MSD's Academic Bowl team will travel to Gallaudet University in Washington, D.C. this May on a quest to win the national championship.
Congratulations to Academic Bowl team members Bella Finkle, Keanu Herzig-Wilcox, Ciara Luttrell, Noam Omstead, Zivia Gale (alternate), and coaches Priscilla Biskupiak and Keith Nolan!
For complete results from the East Regional, visit the tournament webpage at https://sites.google.com/gallaudet.edu/2022-east-regional-ab/home?authuser=0.